Endless-snowboarding game Alto’s Adventure came to Android earlier this year, nearly a year since its original release on iOS. Over that year, the game has been near-universally praised, so I wanted to see what the hype was about. Was I as impressed? Simply put, no. My impressions from the game are as follows.

Alto’s Adventure looks and sounds great, there’s no denying this. Snowboarding down a mountain allows for an endless runner that actually sort of makes sense. Why can you snowboard forever? Because you’re going down a huge mountain, of course. The developers made good use of the setting in other ways too. The pristine snow you snowboard upon and the simple design of the forests and towns you pass through give the game a clean presentation. This minimalist design is gorgeous, and it makes it easy to focus on your character and the action in front of you.

The sound design complements the action well. I’ve played the game with the sound both off and on, and when listening to the music I felt much more in tune with what I was doing. I was able to get in the zone easier. The background music plays on a fairly short loop, which emphasizes the repetition of the game. Rather than being a negative, for me this was another way that I got hooked into the game. The music and sound effects added to the pleasurable, simple aesthetic that the visual design created.

The mountain setting of Alto’s Adventure is serene, and this game would be incredibly relaxing if not for the fact that…

Some Frustrating Goals Took Me Out Of The Moment

Alto’s Adventure has a number of goals to accomplish, grouped in threes to create levels. Most of these objectives are directly or indirectly based on distance (this is an endless runner, after all). For example, Level 6’s goals are to stay airborne for 3 seconds, travel 1,500 meters in one run, and jump over 5 rocks in one run. Other than staying alive for long enough, there isn’t a particular skill to completing any of these; keep going long enough (perhaps less than 1,500m, perhaps more), and you will eventually jump over 5 rocks and stay airborne for 3 seconds without specifically trying to do either.

This is probably how most of the objectives in an endless runner should be, especially one focused on creating a mood, in that they require you to simply keep going for a certain amount of time. The challenge comes from whatever the distance is that it takes to meet the objective, e.g. traveling 15,000m is harder than 1,500m. This setup is good for both the players and developers: difficulty can be easily scaled for later levels, and the player can just go with the flow and still progress. 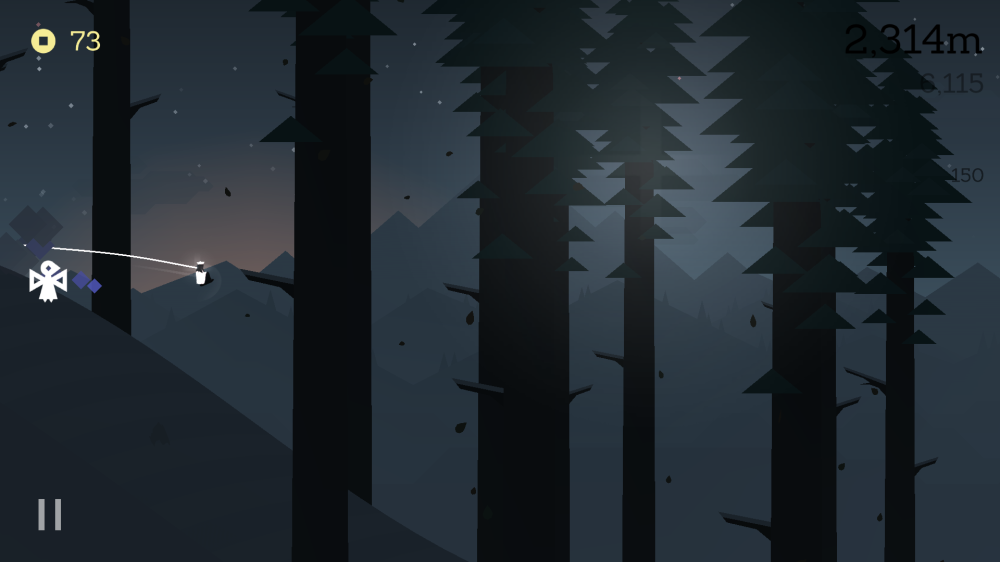 Alto’s Adventure’s goals work best when that is the case. Unfortunately, the developers tried to shoehorn in other objectives that require too much active thought which breaks you out of the moment. For example, in level 39 you have to fly through an archway with the wingsuit. Because the wingsuit wasn’t that enjoyable (more on that below), I generally avoided it, so I was constantly having to break out of the groove I was in in order to activate it every time I thought I saw an archway. That wouldn’t have been a big deal, but the game never tells you what exactly an archway is. There are structures you can grind on which are reminiscent of aqueducts, in that they’re made of several connected arches. I kept trying to fly through these to no avail, and finally got frustrated enough to look up a video walkthrough online. Turns out, the archways the game is referring to are something completely different, which I didn’t notice were actually arches because you see them from the side. And that was not the only time I checked a video walkthrough to make sure I was doing the right thing.

If your goal is to get me to be absorbed into the game, having mechanics which pull the player out of it is a big no-no. Speaking of which…

Flipping Around Is Very Fun, Wingsuiting Less So

Endless runners, or in this case endless snowboarders, are all about movement. You’re always on the move, so making that movement flow well is key. In Alto’s Adventure, the developers were mostly successful in this, especially when it comes to flips. The speed at which the characters rotate in the air, particularly Maya (more on her shortly), just felt right to me, which made landing flips that much easier. Going for double- or triple-backflips when I knew I probably shouldn’t and barely landing them to complete a big trick combo feels satisfying and provides a thrill unmatched by anything else in Alto’s Adventure. Landing flips, and tricks in general, also gives you a speed boost, which contributes to the smooth flow of the game.

Using the wingsuit came much less naturally to me. It’s supposed to be used as a way to string trick combos together, and wingsuits can also be used to save yourself when you know you’re about to mess up a flip. But while backflips quickly became second nature, activating the wingsuit still is something I have to actively consider, which is just about the worst thing a game about movement can have. I’ve gotten more used to it over time, mostly because of the goals which forced me to, but unless I have to use it I forget that wingsuits are an option.

So, why even focus on the goals in the first place? If doing flips is fun, why not just do that the whole time? Well, you need to complete 10 levels, at three goals per level, in order to unlock each new character, which is bad, because…

The Unlockable Characters Are Either Useless or Ruin Other Characters

The titular Alto is the standard rounded character that games commonly start with. He snowboards at a decent clip, and can reasonably complete flips. In other words he’s functional, but once I unlocked the next character, Maya, I never used him again.

Maya quickly became my favorite character, because she flips the fastest and therefore can flip the most (which is awesome, as noted above). Sure, she was a little slower than Alto because she doesn’t gain momentum like the other characters do, but it’s not that big of a deal; all that means is that I need to do more backflips to get a boost instead. As I mentioned, more flipping is not a problem. Even when I unlocked the next character, Paz, who is way faster than Maya, I stuck with her, because Paz backflips so slowly that he felt useless. Once I completed his character-specific goals, I never used him again. (Seeing a pattern here?)

Izel was next, and she is even faster than Paz and flips about as fast as Alto, so she was a viable alternative to Maya. In fact, I quite like playing as Izel, because Alto’s Adventure captures that sense of speed well. There’s a certain exciting recklessness that Izel has, because she snowboards so fast that it’s harder to keep track of what’s in front of you. And while this adds tension, it’s not stressful; it just works. I adjusted to it because flying down the mountain at breakneck speeds is a joy. But, after unlocking Izel, there are still goals with flipping (e.g. land 25 backflips in one run), and that’s just easier to do with Maya. That’s actually a good thing: having characters which specialize, and giving the player incentive to revisit previous characters is a smart bit of design. Alto’s Adventure isn’t perfect in that regard (see: Alto, Paz), but I had fun with Maya and was glad to play as her again.

Until I actually did, because Izel ruined Maya for me. Izel is so fast and Maya so slow, that playing as Maya became a chore. When Alto was my only point of comparison, Maya’s lack of speed was a non-issue. Once I had gotten used to Izel’s pace though, Maya’s runs turned into slogs because of something I wouldn’t have thought was possible: Maya’s backflips became a need instead of a want, and thus lost their fun. Izel ruined flips.

There are two more characters, Felipe and Tupa. Felipe is a llama who can do double-jumps, and while he’s adorable, I never got used to him, so I stuck with my Maya/Izel combo, until I unlocked Tupa, the elder. Tupa falls into the trope of being the god character with all the skills, who flips as fast as Maya, snowboards as quickly as Izel, and has a double-jump for good measure. Meaning, once I unlocked him I had no reason to play as anyone else, which I suppose is fitting.

If you’re going to make unlocking characters the reason to finish goals, and the goals can be frustrating, don’t be surprised that…

There are more goals to complete after Tupa is unlocked, and they are all challenging. This would be awesome if the rest of the game was great as well. Sadly, now that I have all the playable characters to choose from, I realized that Alto’s Adventure hasn’t hooked me as I expected it would, and I don’t see myself coming back.