This year saw the release of huge games like Fallout 4, The Witcher 3, and Bloodborne, as well as well-received smaller titles such as Pillars of Eternity, Ori and the Blind Forest, and Undertale. In a year full of great games, our two favorites were Rocket League and Helldivers.

As 2015 draws to a close, PFX is ending the year with a look back at our favorite games and gaming moments of the year, plus a look forward to 2016. First up, our games of the year.

Like many, I had never heard of the game before it popped up for free on PlayStation Plus, and I am so thankful for the surprise. What stands out the most to me is just how focused RL is. In an age when every other developer seems intent on adding more and more unnecessary bloat, developer Psyonix showed that keeping things simple can be a winning strategy. This is superficially evident in how they shrunk the name from predecessor Supersonic Acrobatic Rocket-Powered Battle-Cars, but the more I played RL, the more I appreciate how well-designed the game is. And it starts from the beginning: from the training mode, which unlike other sports games legitimately trains players, even on advanced techniques; to giving all arenas the same dimensions (which they didn’t in SARPBC) so that the player can learn the moves without having to focus too much on the environment. Then there’s inclusion of Ball Cam, which makes it oh-so-easy to stay focused on the action. Plus the ball itself, which seems floaty at first but soon reacting to its weight becomes predictable. Perhaps the most important design choice is that predictability. Sure, you never know what your opponents will do, but you know how the ball and your car will react to your inputs. You wouldn’t trip, for example, when you try to jump, or have the ball careen off your car at an unexpected angle if you hit it at a given angle. So, if you are getting better you’ll do better. Which of course sounds simple, but I’ve played plenty of games where I couldn’t tell where I was at skill-wise because random variance kept making me feel like I was getting screwed over.

By making these choices, Psyonix gives you everything you need to succeed, including decent AI to practice against, and this leads to not-too-uncommon moments where the player feels like a gaming god. So you’ll have a few of those, see some videos of other players flying through the air like Superman, scoring goals from ridiculous positions, and think, “I could do that.” Then you take to the skies for the first time and completely whiff, letting in a goal in the process, and realize you’ve still got so much left to learn. The crazy thing is, when I had that moment I was happy, because it meant that I’ve got more RL to play, and somehow it always feels like there’s more to learn. Even if I never master the game, I know I’ll continue to thoroughly enjoy trying.

Since it launched, I’ve kept coming back to Rocket League every couple of weeks or so, sometimes just for a half-hour at a time. But because of some key features, it feels like I’ve never left.

The Witcher 3, Fallout 4, and Metal Gear Solid V are some of the best games I have ever enjoyed, despite each one having a few negative points worth mentioning. However, only one video game this year managed to provide that same level of amazing enjoyment while avoiding any major issues. That was Helldivers. This “little” game is able to stand out even in such a massive year, helping to really define these past twelve months as some of the most interesting in gaming. 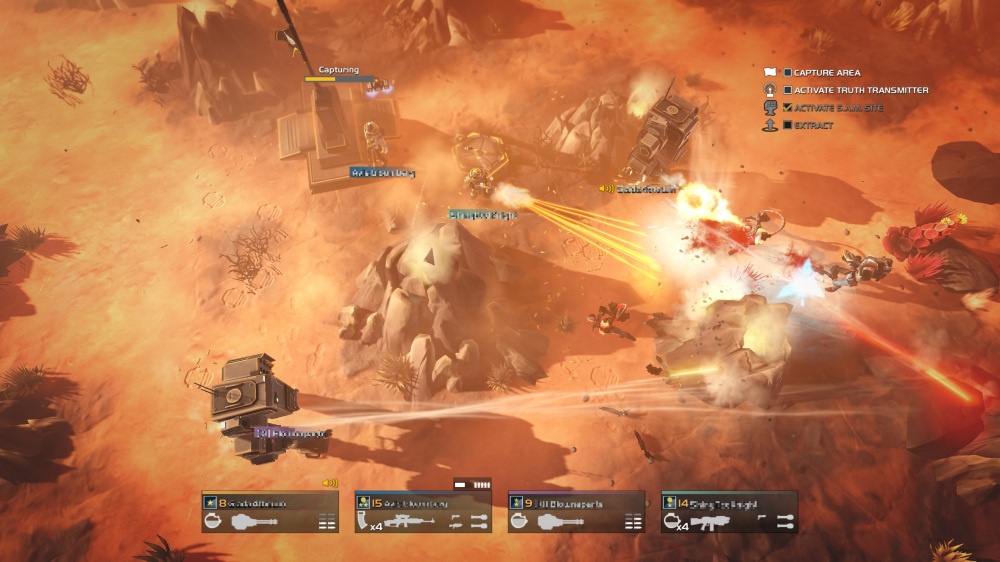 Traveling the galaxy as a futuristic super-soldier, you take on repeatable missions across many planets, spreading “democracy” and protecting humanity’s space empire. Every mission you play, alone or with others, adds to a community pool of points. Once enough points are gathered by the community in a sector of space, the army of helldivers reaches the home planet of the enemy aliens in that sector and a war begins in which you try to conquer their planet. The community point system allows you to make a difference in the game in practical terms even if you play solo missions only, and this allows each and every player to feel a sense of connection to the game no matter how they play or their skill level. Objectives range from capturing points, to scenarios that string together goals such as hostage rescue, target elimination, and calling in nuclear strikes on enemy bases. This design gives every player a fair challenge for their skill level, whether playing alone or with others. In turn, both solo and co-op play have value by challenging you in different ways. Soloing missions emphasizes stealth and unique strategies, while multiplayer focuses your attention on working together with your teammates and avoiding friendly fire. Each of these approaches grows your skills in different ways, and your skills grow the most from playing missions both solo and with others.

All of this feeds into a deceptively simple (yet massive) leveling and upgrade system. Every rank unlocks new items with which to customize your play-style, allowing you to develop countless strategies to achieve every goal. “Strategems” stand out here; these are item that you call in via airdrop during missions, ranging from from heavy weapons and vehicles, to drones. Carrying the right combination of strategems  for your play-style and knowing when to use them adds an unparalleled level of depth to the game’s strategy.

This is all built on a foundation of tight, responsive controls, challenging combat, and amazing enemy variety and design – a combination that has created some of the most thrilling action I have ever enjoyed in a video game. The depth and smart design results in a beautiful gaming package that is easy to get into and difficult to leave: fair challenges that always have more for you to learn and unlock, excellent solo and multiplayer support, vibrant visual and sound design, and a ridiculous sense of humor that immerses you in its universe with little effort.