World of Warcraft’s latest expansion, Warlords of Draenor, has launched in the EU just a few hours ago and will be launching in the US at midnight PST. Reaching the new world can be done through the Dark Portal in the Blasted Lands. As a result, the Dark Portal no longer leads to Outland, but to an alternate version of that planet before its destruction, Draenor, which has been forced into the main game’s universe from an alternate time line. The Iron Horde, having been given access to time-traveling magic and advanced siege weaponry, have brought their forces through time from that alternate universe into the main universe in which the Warcraft games take place.

With the opening of this expansion just a few hours away for US players, the Alliance and Horde forces at the Dark Portal have advanced to its steps, fighting off waves of Iron Horde, waiting for an opening to invade Draenor, and signaling the start of World of Warcraft’s latest expansion. Below you will see the event as it is happening right now. Take care if you are not max-level or well-geared, as some of the Iron Horde are elites, though both NPCs and players that have gathered there should be able to protect you. 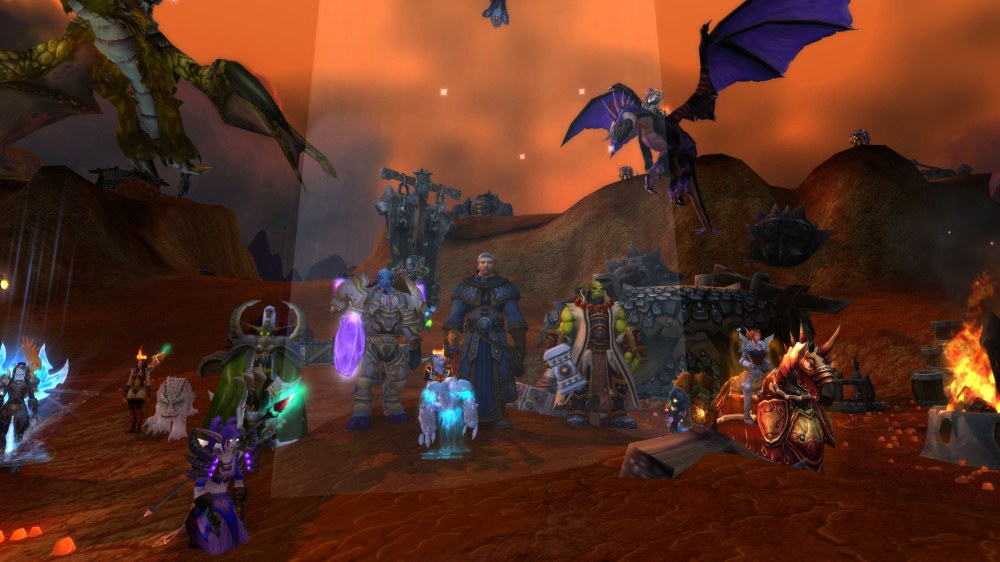 Notable characters from Warcraft history gather to lead the assault on Draenor against the Iron Horde. Both factions are represented, though no faction-specific leaders are present.

This is the Horde side of the siege. Interestingly enough, there are many named NPCs that are not prominent in lore. Players are mixed in as well. The same diversity can be found on the Alliance side, as seen below. It makes the battle much more interesting!

Alliance members gather next to the Horde on the opposite side of the Dark Portal. The portal itself has changed to a red color from its standard green, showing the use of time traveling magic and the presence of what is effectively a new world in the universe, rather than merely an alternate version from the past.